Sowing the Seeds for a United Homeopathic Profession in Ontario

Just over a year ago the Canadian College of Homeopathic Medicine (CCHM) sponsored a weekend seminar on Pediatrics by Farokh Master and Kim Elia.  During this weekend, Joyce Edge, our Director of Admissions, had an idea.  Would it be possible to bring the Homeopathic community together?

To this point, many individual Homeopaths, associations and schools had written letters of complaint to the Ministry of Health regarding the inequitable representation of the profession on the Transitional Council.  But, there was no attempt at collective action to show the Ontario Government that we are a unified profession.

This idea led to the first meeting of the Ontario Homeopathic Coalition which took place here at the CCHM on June 1st, 2010.  Representatives from the majority of associations and schools attended this first meeting which included;

The goal was not to focus on the differences between the various Homeopathic associations and practitioners but rather to emphasize common ground and to present a united front to deal with the profession’s inequitable representation on the Transitional Council.

CCHM organized bi-weekly meetings to take place thereafter.  By July 2010, the Canadian Society of Homeopaths, the School of Homeopathy and the Canadian Homeopathic Institute had joined the coalition.

The coalition immediately began to explore ideas for action.  One of the earlier steps was the development of a business plan for a united professional association.  Lots of time was spent laying the groundwork for consensus-building,  focussing on giving the opportunity for these groups, who had never worked together, to get to know each other and build trust.

On October 13th, 2010, the Transitional Council invited the leaders of the Homeopathic Community to participate in a Leadership Day that came about because of the HAA summit and NUPATH joint conference that were already planned for the same week.  All of the associations and schools were invited to send a delegate to this event along with other prominent members of the Homeopathic community.  On October 14thand 15th, the Homeopathic Action Alliance (HAA) held the Canadian and U.S. Homeopathic Standard Summit.  NUPATH had been able to influence the HAA to hold this summit in Toronto because of the regulation process already underway in Ontario. This was an assembly of the top Homeopathic minds in North America reviewing the ACHENA standards.  Members of the Transitional Council including the Registrar, two staff, two professional members and one public member attended as observers and came away being thoroughly impressed.

The HAA summit was followed by the NUPATH conference which was another opportunity for members of the coalition to physically come together and continue the process of building trust.

But, the work didn’t stop there!  In October 2010, we received a tip that CBC Marketplace was going to do a piece on Homeopathy.  Although the initial optimism of a fair, investigative show faded quickly, Marketplace’s biased journalism actually provided a huge opportunity for the whole Homeopathic community across the country to unite.  In response to such an unfair attempt to smear Homeopathy, the Ontario Homeopathic Association (OHA) also joined the coalition’s efforts marking the first time in the history of the modern Homeopathic profession that the whole community was unified with a single purpose.  All of these efforts resulted in 278 comments on the CBC Marketplace website prior to the airing of the program, the majority of which supported Homeopathy.  These events also led to the development of a wonderful website www.extraordinarymedicine.org that was spearheaded by NUPATH.

On December 18th, 2010, a joint letter supported by 85% of the Homeopathic community was sent to Deb Matthews, the Minister of Health for Ontario with the aim of creating more balanced representation on the Transitional Council.

The Canadian College of Homeopathic Medicine has also had 2 successful networking events on November 2nd, 2010 and May 3rd, 2011 to continue our efforts to create a more cohesive and connected Homeopathic community.  The May 3rdnetworking event brought the Homeopathic community together to celebrate the evolution of CCHM and also to launch our affiliate internship clinic -Blueprint Wholistic Health.  Most importantly, Bazil Ziv (Registrar of the Transitional Council), Janet Blanchard (Policy) and Eden Gajraj (public member of the TC) gave an important presentation to the Homeopathic stakeholders educating us about the role of the TC, differentiating their role from that of our associations.  This presentation by the TC led to a very interactive discussion and illustrated the need for more dialogue between the TC and its stakeholders (professional Homeopaths).We also had the Canadian premier of Carol Boyce’s wonderful new film. ‘Homeopathy Around the World’ that evening.

Finally, four of the main associations in Canada (NUPATH, HMCC, HMAC and OHA) are currently working together for the first joint National Conference ever which will take place this fall on October 21-23rd, 2011.

The significance of these events over the past year should not be underestimated.  This is the first time that the Homeopathic community in Ontario has consciously worked towards a unified profession.  It also proves how much an idea combined with a willingness to look past obstacles to truly build a consensus benefits all of us and especially benefits our beloved profession of Homeopathy.

PrevPrevious JournalLet’s Celebrate Our Evolution!
Next JournalHomeopaths Working Together- Yes, YOU Are A Stake Holder in the Process of Regulation!Next 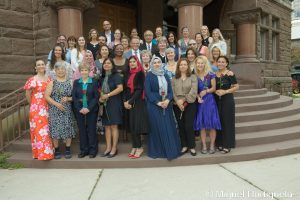 We held our much awaited graduation in September and here are some photos of this beautiful community celebration. Many congratulations to the graduates and now

My Digestive Issues Led Me To Homeopathy

By Jessika F., Elmira     Life is a journey, if we are willing to take it.  My life so far has been filled with

Why I Want To Learn Homeopathy As An RMT

By: Jayme H., Mount Forest There have always been differences of opinion in my family about health care.  My sister is a Nurse Practitioner and I am