This is the season of the common cold, and with it comes coughs, fevers and congestion. In my practice, I often see patients coming in at this time of year with one or more of these symptoms. While many people’s automatic response is to turn to the aggressively advertised cold medications that mask the symptoms, homeopathy is a valuable alternative that can actually stimulate the body to heal itself.

Homeopathy draws from a vast array of plant, mineral, and animal substances which are diluted many times over and designed to trigger a healing response in different situations. In order to select the correct remedy, the symptoms of an illness are matched with the symptom picture of a particular homeopathic medicine. Classical Homeopaths conduct in-depth case taking with each patient in order to explore a person’s deep constitutional nature, and then a remedy is selected which matches that person’s constitution. Alternatively, homeopathy can be used as a first-aid intervention when the signs of sickness appear. In this article, we will look at specific remedies that may be useful in treating certain cold symptoms, depending on the complete symptom picture.

The fact is, not all coughs are the same; nor are their cures. Dry coughs usually produce no mucus and include an irritating tickle in the throat, while loose coughs produce a great deal of mucus and may involve a rattling in the breathing and in the cough. Other coughs involve episodes of violent and prolonged spasms. In each instance, the best homeopathic remedy will vary. For example:

1) In the case of a dry and severely painful cough felt in the whole head and chest, and which is worsened by swallowing, bending the head back, becoming overheated, or sitting up from a lying down position – for this I’ve had the most clinical success with homeopathic Bryonia;

2) In the case of a dry, tickling cough accompanied by a chest infection, laryngitis and hoarseness that involves a great thirst for cold water, is made worse by going from warm to cold air, and improves with warmth and with lying down on the side – for this my favourite remedy is Phosphorous;

3) For a loose, rattling cough accompanied by shortness of breath and distinct rattling when breathing in and out – my favourite remedy is Antimonium tart;

4) For a tickling cough accompanied by scant, difficult expiration which may vanish for periods of time during the day and return at night – my favourite remedy is Causticum.

Fever develops either as a result of external factors such as infections, or internal factors such as auto-immune disorders, and is the body’s natural defensive response. For many people, a fever below 102°F is not too serious; however, such a fever in infants, small children, the elderly, or those with specific serious illnesses can be a danger sign.

Again, it is useful to differentiate the nature of the fever when considering the best homeopathic remedy. For example:

1) For a fever that strikes suddenly following exposure to cold air or wind, is worse at night, is temporarily relieved by sitting up and breathing open air and is accompanied by fear, anxiety and a great thirst – my favourite remedy is homeopathic Aconite.

2) In another type of fever, the head is hot but the body and hands are cold. This fever may come and go, is generally worse after midnight, generates much restless anxiety, and the person wants to sip at warm drinks – for this, my favourite is Arsenicum.

3) In the case of a sudden, intense fever, possibly including delirium, the face may be brightly flushed and the eyes glassy with dilated pupils. In this instance, the person may also have a sore, bright red throat, thirst for sour drinks, and the fever may worsen with motion, light or noise; for this, my favourite homeopathic remedy is Belladonna.

These are only a few examples. Much depends on the person’s overall symptoms and general constitution when choosing the remedy for fever.

This condition occurs when swelling of the membranes of the nasal passageways takes place. This is a frequent symptom of a cold and it makes breathing difficult. Locating the correct homeopathic remedy may largely depend upon the nature of the discharge, the presence of crusts and scabs, as well as the other symptoms most often described as “a stuffed nose.”

Here are different options to look at:

1) One remedy I frequently prescribe for complete nasal obstruction that is worse in the cold and better with heat, is accompanied by a nasal tone of voice and thick, stringy mucus, is Kali-bich.

2) Another favourite of mine for nasal obstruction that tends to be one-sided only, and where the mucus runs by day and is blocked at night and may be accompanied by chills and irritability, is Nux-v.

3) Still another I might choose when there is dryness in the nasal passages, mouth, throat and palate, and crusts and scabs may be present in the nose as a result of such dryness, is Sticta.

Needless to say, the choice of a remedy depends on the full nature of a person’s symptoms. For this reason, a full homeopathic case-taking is always needed before choosing the best homeopathic remedy for your cold symptoms, or for you constitutionally.

Paul is Professor of Materia Medica, teaching Botanical and Homeopathic medicine, patrenteral therapy and clinical supervision at the Canadian College of Naturopathic Medicine in Toronto.

A Day In the Life of a Homeopath: Soheila Tavallaei, HOM

Here is our second installment of a new CCHM blog series called, A Day in the Life of a Homeopath. Today, we are pleased to introduce 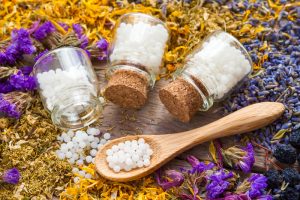 Why the Interest in Homeopathy?

From Erica H., Ypsilanti, Michigan Why study homeopathy?  The short answer is that it works without poisoning my body.  It is less intrusive than allopathic